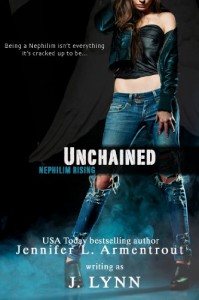 I was granted a free copy of this book by the publisher in a prize draw on twitter. Thank you entangled publishing!

This is book one in a new series by Jennifer L. Armentrout's adult writing alter ego J. Lynn.
It focuses on a divine war between the heavens and Fallen angels with the half-angel, half-human offspring of the Fallen (aka. the nephilim) being used as pawns and cannon fodder in the war.

Lily is a kick-ass Nephilim hunter who hunts the fallen angels, corrupted nephilim and the mindless zombie-like - "deadhead" - creatures that they create in their quest to destroy souls and I don't know.... Take over the world or whatever. That part is never quite made clear.
Lily is spunky, snarky and generally thinks she knows everything, but despite this you like her.

Julian is a Fallen angel and he is quite mysterious, sexy, powerful and protective. However, I found him... he was/is.. Well... A bit boring *ducks projectiles*. I'm hoping we get to see more of Julian in other books and that a distinct personality develops for he really faded into the background for me (in respect to the fact I wasn't all that fussed by him) despite being a major player in this book (I mean, hello! He is the love interest).

The background characters in the novel got a fair bit of "screen-time" and I hope to see more of them and learn more of their stories in books to come (cough - Adrian - cough - Nathaniel - cough - Michael).

I'm not sure where this series is headed from reading book one but I enjoyed the ride enough to want to continue down the road when the next one is released.

Not quite sure what else to say about Unchained really. It was good, it wasn't great (it wasn't gripping from the get go like the Lux or Covenant series) but it was good and I'd recommend it to people that like their Urban Fantasy with a good splash of sexy and to anyone who has read and enjoyed other books by J. Lynn/Jennifer L. Armentrout.